A Brief History of the NYC Cannabis Parade & Rally

The origins of the NYC Cannabis Parade & Rally, which began as a “Smoke-In” organized by the Yippies in 1973, are a little hazy.

In the mid-1960s, Beat poet Allen Ginsberg organized LeMar, for Legalize Marijuana, and picketed outside Jefferson Market Courthouse (now a library) in New York’s West Village, and outside Christadora House, where federal offices were located in the East Village, opposite Tompkins Square Park.

A few years later, the hippie scene in the East Village was centered in Tompkins Square Park, with concerts by top acts like the Grateful Dead, Jimi Hendrix, Santana, Charles Mingus and The Fugs at the band shell. Abbie Hoffman, Jerry Rubin, Dana Beal, A.J. Weberman and Jim Fouratt were all part of that scene

The first unofficial NYC Smoke-In” took place at the Grateful Dead concert in the park in the Summer of 1967. Beal brought a bunch of weed, rolled up a bunch of joints and passed them around at the concert. Some say he got the crowd going when he threw joints in the air from the stage, a tried-and-true tactic.

The story goes that Yippie!, a New Left mass movement that fused cultural revolution and political revolution, was born in the East Village during an acid trip on New Years Eve 1967.

The next summer, the Yippies got pounded by Chicago police during protests outside the Democratic National Convention, which resulted in major media coverage and the arrests of Yippie leaders Abbie Hoffman and Jerry Rubin. With the Chicago 7 conspiracy trial that followed, the original Yippies built up a network of supporters and fellow travelers that formed numerous chapters around the country and Canada. 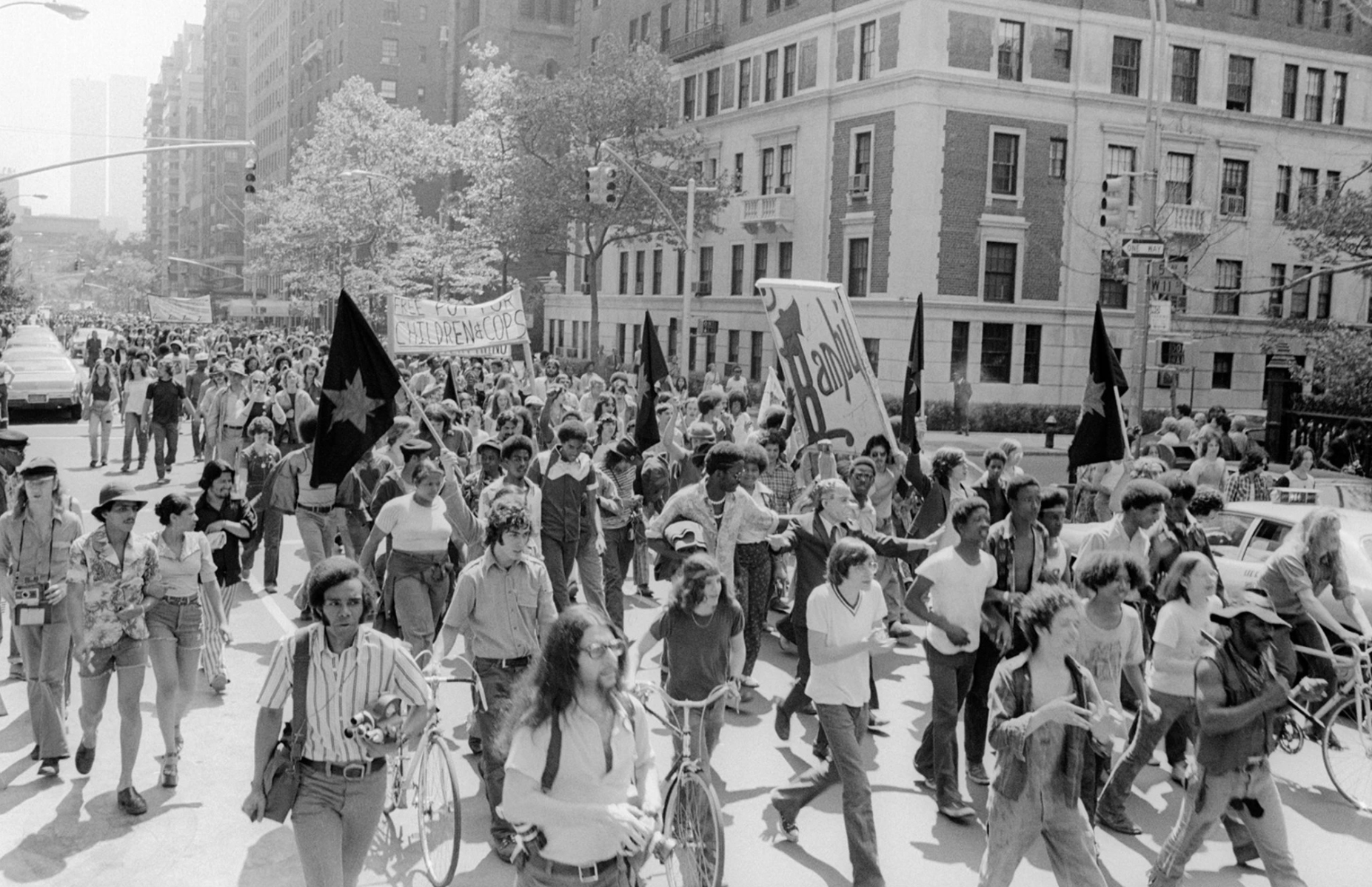 The march in 1974, photo by Allen Tannenbaum

In addition to ending the Vietnam War, fighting for racial justice and exposing the misdeeds big corporate interests, the Yippies were committed to full cannabis
legalization. In July 4, 1970, the Yippies protested a Washington, DC event called “Honor America Day,” which featured comedian and military favorite Bob Hope and the Rev. Billy Graham as co-hosts, on the grounds of the Lincoln Memorial. Thousands of Yippies and hippies showed up and honored America by smoking copious amounts of marijuana. When they tried to take over the stage, the protesters were met with tear gas grenades. The event degenerated into chaos as arrests were made, fistfights broke out and gas wafted through the night.

The next 4th of July, Yippies gathered on the Capitol Mall for the first official July 4 Smoke-In, an event that’s endured for 47 years without interruption.

Another marijuana event that took place in 1971 was the Free John Sinclair Rally in Ann Arbor, MI, with John Lennon, Stevie Wonder, the MC 5, David Peel and many more. Hash Bash in Ann Arbor was founded in 1972.

According to Blacklisted News: Secret Histories from Chicago ’68 to 1984, the first official New York Smoke-In took place in 1973 in Washington Square Park on May Day (May 5), hence the term, “Jay Day.” Eventually, the first Saturday of May became the set date for the parade and rally..

That Smoke-In concluded with a march to John and Martha Mitchell’s home and a protest outside of it (Mitchell was the U.S. Attorney General at the time).

The decade ended with parades, including punk bands playing on a flatbed trailer, marching up Fifth Avenue to a Rock Against Racism concert in Central Park. Often these were organized by the Yippie! front group, the Fifth Avenue Marijuana Parade Coalition.

While attendance in the annual New York event had peaked in the late 1970s at about 20,000, annual ’80s crowds ranged from a few hundred to several thousand. Smoking at these events was not without risk, even given the rumors that “pot was legal on May Day” and “the helicopter will be dropping joints at 2 pm.” People were often busted on the periphery of the crowd, while Yippies circulated in the inner core lighting joints and passing them on.

Organizers were sometimes hauled in after a speech or in a dispute over permits. The smaller the crowd, the more likely people got busted for smoking.

By the early 1980s, the Rock Against Racism organizers split off from the marijuana activists and had the concert follow the Smoke-In by a day. This opened up the opportunity to use the march to make a political point by protesting at various sites in Manhattan and then marching to Washington Square, or vice-versa. These sites included Dag Hammarskjold Plaza, Rep. Charles Rangel’s office, the Partnership for a Drug-Free America in the Chrysler Building and others.

A factional split saw the odd occurrence of “dueling” Smoke-Ins and parades, where one group might have the early time slot at Washington Square and marching, while the other group gathered elsewhere and marched to the Square for a later time slot. Once, both marches met at the intersection of Fifth Ave. and 42 St. opposite the New York Public Library.

By the mid-1990s crowd size had started building again, with thousands present in 1994 in Washington Square Park for a rally featuring the Chambers Brothers.

Two of the biggest crowds were in 1995 and 1996 with estimates of up to 30,000 in attendance, and more than 300 arrests at the latter Smoke-In. The large crowds and resulting mess were excuses to eject the event from its longtime home in Washington Square Park.

Battery Park, at the southern tip of Manhattan, with its stunning view of the Statue of Liberty, became the new location for the Smoke-In. While at first the crowds were large and the event expanded to a second stage, arrests piled up and attendance dwindled.

It was time for a new strategy: Take the event global.

The effort to globalize grew, in part, out of the efforts of Cures Not Wars traveling the country and the world attending NORML events and other conferences on the drug policy and harm-reduction circuit. There they met other like-minded activists and identified those who were organizing or could organize events in their areas. This activity became viral in the mid-2000s as hundreds of activists joined the network. At the same time, many of these activists were spearheading initiatives and referenda in their communities and states to legalize medical marijuana and to decriminalize recreational marijuana.

Putting out a common graphic with a unified set of demands was another thing Cures Not Wars did, printing and mailing thousands of posters each year, so that local organizers had something to work with. Some of the early posters were quite striking (e.g., 2001’s Space Odyssey), while later in the decade the long list of cities often overshadowed the graphic.

London was one of the first international cities. Paris and others soon followed and some of these marches have become the biggest pot events in the world. (London, Toronto and Rome routinely have crowds with tens of thousands of participants.)

Bans have been implemented, skinheads attacked marchers and were beaten back in the Ukraine, and events have been advertised from Jakarta to Kathmandu to Medellin.

Ironically, while expanding the network and building a list of more than 300 cities around the world, the New York City event was often neglected. Local organizing was minimal and disorganized, and crowds in the mid- and late-2000s averaged about 200 people. Like a gypsy, the Smoke-In moved around from location to location until receiving a permit to move to Union Square Park in the middle of Manhattan. 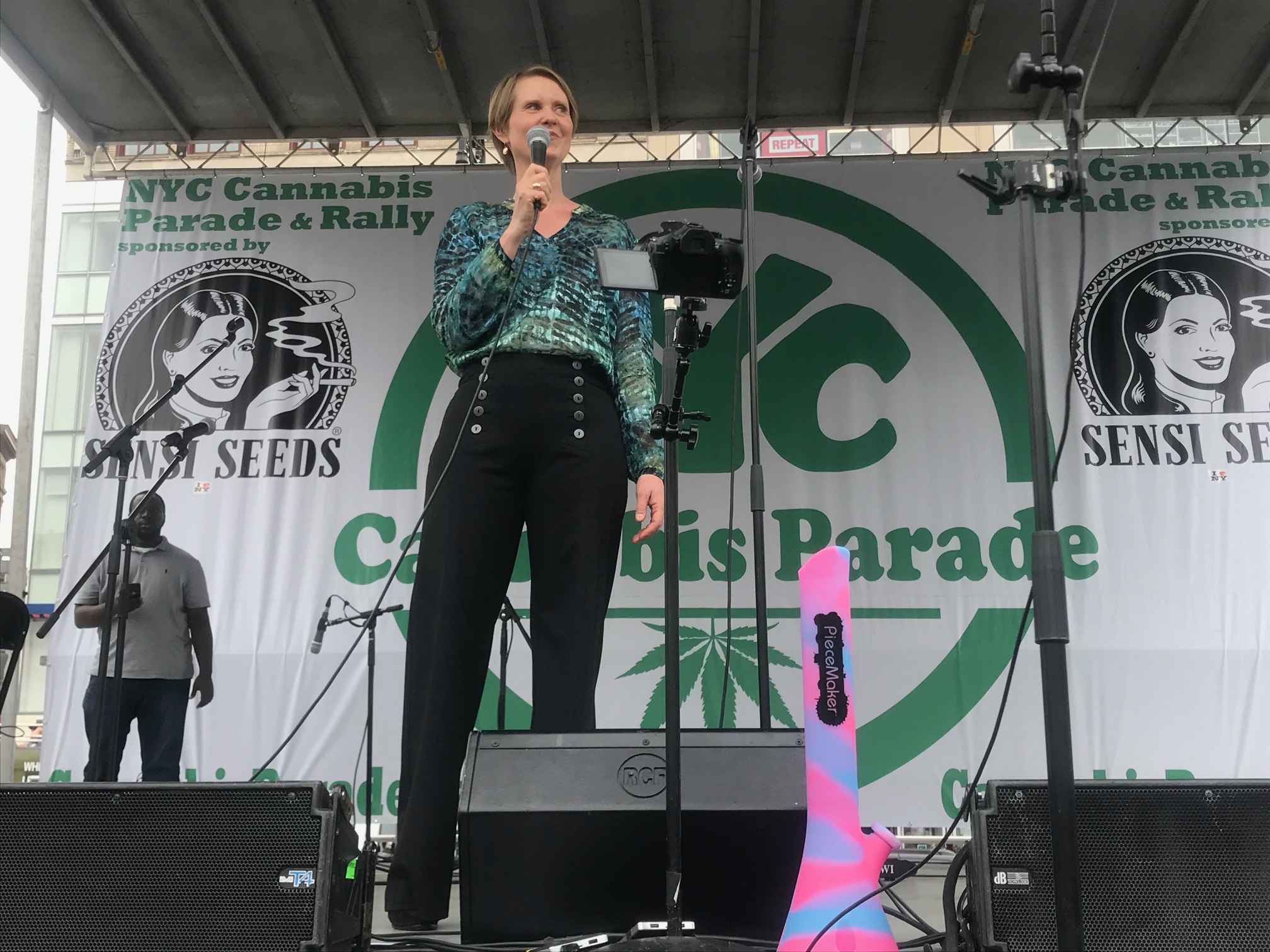 Another round of rebuilding coincided with the development of a new cannabis movement and industry in New York. Elected official officials began to view the Smoke-In, which been renamed NYC Cannabis Parade & Rally, as a viable venue to express their opinions about the drug war and marijuana prohibition.

For several years in a row, popular New Jersey rapper Redman headlined the event, which had evolved to a march from Herald Square to Union Square and then a four-hour rally event with speakers and musical performances.

The decline in arrests that began in 2013, coinciding with the City’s new cannabis policy under Mayor Bill de Blasio, helped create a safer environment and attendance continues to grow.

A large coalition of activist groups and non-profits now support the event. Sponsors are able to advertise their products and information tables are there for the curious.

In 2019, Williams and Gottfired returned to our stage at a key moment, as advocates fought in Albany for legalization. 420 Funk Mob, the High & Mighty Brass Band and the CCB Allstars headlined a full day of speeches and performances.

The NYC Cannabis Parade & Rally is a direct descendant of the Lower East Side revolutionary counterculture whose popular demand for personal freedom and social justice erupted in the 1960s, forcing social change through direct action. As the continuation of the event that launched the international legalization movement, the Parade & Rally will continue to provide activists – and the elected officials who choose to ally with us – with a public space in which to articulate demands for real reforms that benefit the people. We will not settle for anything less.

The history on this page shows that legalization did not come as a gift from the top down – it came up from the people through struggle.