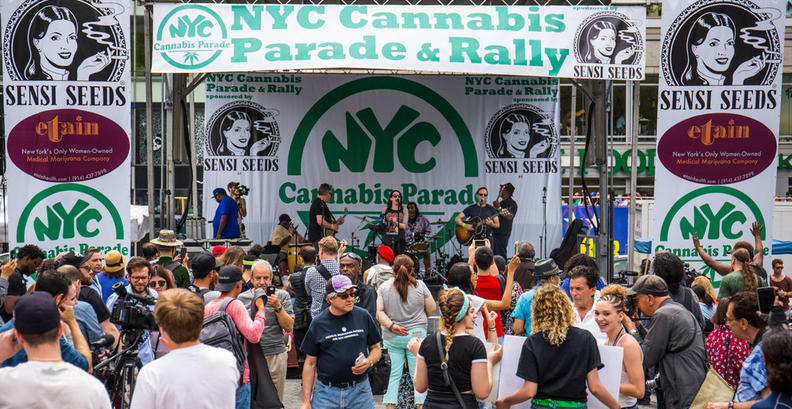 This year’s Event will take place as New York State lawmakers debate the merits of the Marijuana Regulation and Taxation Act.

A lineup of elected officials, industry experts, activists and musical performers will educate and entertain the crowd throughout the day.

The Event begins at 11 am with a pro-legalization speak-out at the assembly point at W. 32 St. and Broadway. At 12:30 pm, the Parade marches down Broadway to Union Square Park, where the Rally will take place from 1-5 pm.

The speaker lineup includes recently-elected New York City Public Advocate Jumaane Williams and Assembly Member Richard Gottfried (District 75, Manhattan). Both will speak at the Rally in Union Square – Williams at 2:25 pm and Gottfried at 2:35 pm. See the complete schedule of speakers and performers below.

At a forum in Brooklyn on April 29, the Public Advocate revealed he sold small amounts of marijuana while he attended Brooklyn Technical High School in the early ’90s. “It shows it’s more common in spaces than people are willing to accept and it shows that there’s just an over stigmatization of it, unnecessarily,” he said.

Williams favors legalization that includes expungement of marijuana convictions. “You have people who are locked out of systems of getting permits, of getting education because they’ve done things like sell marijuana,” he added. “So, if you’re now making it legal, you have to make sure that those same folks have the ability and accessibility to sell that as well.”

Following the Parade & Rally, there will be an Afterparty at SOB’s (204 Varick St.) featuring speakers, music and sponsor tables from 5-10 pm. Tickets are $20 in advance, $25 at the door.

About the NYC Cannabis Parade & Rally

The New York City Cannabis Parade & Rally (NYCCPR) is among the longest running marijuana legalization events in the world. What began as a “Smoke-In” in Washington Square Park organized by the Yippies in 1973 has evolved into a two-part Event: A Parade down Broadway and a Rally in Union Square Park, all on the first Saturday in May. Sister events take place in more than 300 cities worldwide on the same day. NYCCPR is the founding chapter of the Global Marijuana March.

The event’s mission is to end the prohibition of cannabis at all levels – international, federal, state and local. Ten states have legalized marijuana since 2012. New York and New Jersey are both on paths to legalization. Thirty-three states allow access to medical marijuana, including New York, New Jersey and Connecticut. By June, perhaps New York will pass legislation.

These factors make this year’s Parade & Rally all the more important. New York has come a long way from when 50,000 residents were being arrested a year for marijuana possession. Arrests are down and policy has changed since last year. Now the goal is complete legalization, with a fair and equitable commercial marketplace, like in California and Massachusetts.

For more information, go to: cannabisparade.org