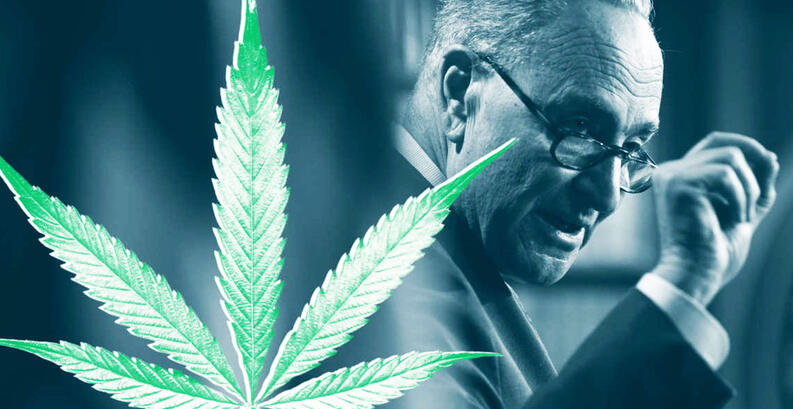 Several Albany lawmakers – including Senators Alessandra Biaggi, Brian A. Benjamin and Jessica Ramos – will join the U.S. Senate Majority Leader in addressing the recent legalization of cannabis in New York State. The presser kicks off at High Noon.

The event will begin with the traditional parade at 11 am. Marchers assemble at between W. 31 St. and W. 32 St. on Broadway. The rally/press event in Union Square will begin at 12 pm.

"We're extremely excited about this," says event organizer Troy Smit. "Senator Schumer is our senator and is a big supporter of cannabis law reform."

The event, which was canceled last year due to Covid-19, will focus on the recent legalization of cannabisin New York State and New Jersey as well. It will follow New York City Covid-19 guidelines, which allows for 200 people in an outdoor space. Masks and social distancing are required..

Sen. Schumer is leading the federal effort in Congress. Along with Senators Booker and Wyden, he's writing legislation that would end cannabis prohibition.

Senator Schumer will be joined in Union Square by State Senators Alessandra Biaggi, Brian A. Benjamin and Jessica Ramos; Assembly members Harvey Epstein and Emily Gallagher; and numerous local legalization activists. All five lawmakers were co-sponsors of the MRTA – the Marihuana Regulation and Taxation Act – which was passed in Albany on March 30 and signed into law signed into law the next day by Governor Cuomo.

A virtual event will take place on May 2.

*This schedule is subject to change.

A follow-up NYCCPR Zoom event will take place on May 2.

For more info about the May 1-2 events, go here.

"In 2018, I was the first member of the Democratic leadership to come out in support of ending the federal prohibition," he recently told Politico. I'm sure you ask, 'Well what changed?' Well, my thinking evolved. When a few of the early states — Oregon and Colorado — wanted to legalize, all the opponents talked about the parade of horribles: Crime would go up. Drug use would go up. Everything bad would happen.

"The legalization of states worked out remarkably well. They were a great success. The parade of horribles never came about, and people got more freedom. And people in those states seem very happy.

"I think the American people started speaking with a clear message — more than two to one — that they want the law changed. When a state like South Dakota votes by referendum to legalize, you know something is out there."

One of the longest-running cannabis leglization events in the country, the NYC Cannabis Parade & Rally began in 1973 as a “Smoke-In” in Washington Square Park. A march was added to the proceedings several years later.